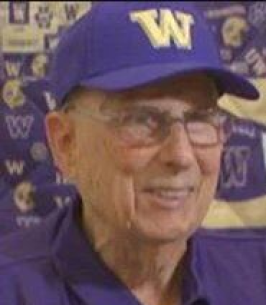 Emmit R. Aston, Jr. 86, passed away at his home of congestive heart failure on September 2, 2022. He was comforted and surrounded by his loving, devoted family. He was born on May 30, 1936, in Omak, WA, to Emmit R. Sr. and Lela Aston. He attended Omak High School. He was active in the Boy Scouts of America, very active in athletics, played the trombone in band, ASB President and graduated in 1954. Emmit enrolled in the University of Washington in 1954. He was accepted into the School of Pharmacy and graduated with a Bachelor's of Science in Pharmacy in 1959.

He married Bonnie B. Cederblom of Omak, in 1957, and they began a family. In May of 1960, they made beautiful Lake Chelan, WA, their home, where they raised three daughters.

Emmit started his pharmacy career in Shelton, WA, but the couple wanted to be closer to home. He began working at Green's Drug in Chelan. He wanted to own his own business. They purchased Kier Drug in Chelan in May of 1967, and changed the name to Aston Drug Center. It was a family operated business, with Bonnie at his side.

In 1974, they wanted to expand the pharmacy business and purchased the Kline's Variety Store building next to the Ruby Theater. The pharmacy was moved into this larger building after an extensive remodel. Today, you can see the words Variety & Dry Goods on the outside of the building. When the family retired, they gave the large pharmacy safe to Stormy Mountain Brewery, who occupies half of the Aston's original building. The pharmacy safe is still on display today in the brewery.

Through the years, Emmit and Bonnie were active in the community. Emmit was a Boy Scout Leader, member of the Junior Chamber of Commerce and Police Auxiliary. He was past president and very active in the Chelan Rustlers. Emmit was a Chelan City Council Member. He was instrumental in getting the beautification project complete of the downtown 100 and 200 block area on Woodin Avenue. This project improved the sidewalks, streets, lighting and infrastructure of Chelan to make it the historic, beautiful town that it is today. Emmit was a founding member of the Chelan Sign Committee, which ushered in a cohesive look to Chelan Valley Businesses. He sat on the City of Chelan and the Chelan County Urban Growth Committee. After working long days at their pharmacy, Emmit drove to Wenatchee to lend his knowledge. Lake Chelan Valley's beauty can be attributed to the volunteerism Emmit participated in.

Emmit was the longest-standing member of the Lake Chelan Health and Wellness Foundation, and a valued member of the local healthcare community. His dedication to the foundation started in 1991. He enjoyed serving on the board and giving back to the community. Emmit got to see his longtime dream of building a new hospital come true. The Board and hospital staff gave him a personal tour of the new hospital in June, prior to its completion. His family states this was one of the happiest days in his life, and they are very thankful to all who made this dream come true.

Emmit and Bonnie enjoyed their ranch outside of Chelan with the three daughters. Emmit loved caring for the land, being outdoors, raising horses and various animals. Emmit also was an avid elk hunter. His last elk taken was a huge six-point, which was on display at the pharmacy and became quite a conversation piece. Emmit enjoyed talking to visitors about his elk hunting trips.

Emmit retired, and they sold the pharmacy in June of 1991. The business was converted to Aston's Gifts Cards, Etc., where Bonnie enjoyed working until 2010. Emmit thrived in his second career as a Real Estate Agent. He also did pharmacy relief work at community pharmacies in North Central Washington.

Emmit was an avid University of Washington fan and enjoyed attending the Husky Football games, which was a life's dream. He was an alumni member and attended the Rose Bowl game four times. Emmit's wardrobe consisted mainly of purple and gold. He always wore the college colors proudly!

The family is very grateful for the tender care he received from Tina Jack, employed by Care Med Chelan. Tina was at Emmit's side for months, and the family could not have cared for him at home without her!!! Also, thank you to the professional, caring staff at Value Plus and Confluence Home Health and Hospice, both of Wenatchee, WA.

Emmit's Celebration of Life will be held on October 22, 2022, at 2:00 p.m., at North Shore Bible Church, 123 Wapato Point Pkwy., Manson, WA. You are invited to dress casual and wear your favorite sports team colors. In lieu of flowers / gifts, Emmit requested contributions be made to Lake Chelan Health and Wellness Foundation, P.O. Box 1911, Chelan, WA, 98816. For electronic contributions, go to their website at: lchealthwellness.com.

Please visit Emmit's online memorial page at www.heritagememorialchapel.com. This is a nice place to share memories with the family. Arrangements are in the care of Heritage Memorial Chapel, East Wenatchee and Cashmere, WA.His Celebration of Life Service will be available to view after the fact on the FaceBook page of Northshore Bible Church.