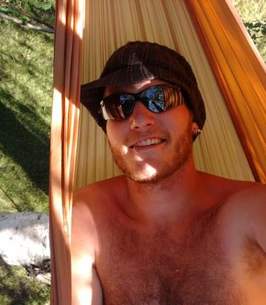 Chad Byron Cummings, at age 35, passed away at Central Washington Hospital on Wednesday, August 31, 2022. He fought a long, hard battle with Metastatic Testicular Cancer before passing away surrounded by his wife, mother, sister and best friend.

Chad worked as a wood finisher, primarily in cabinetry and doors. His job was a messy one, so most often you would find him in work clothes there were covered in various stains and paints. Not only did he work hard, he played hard too. He loved the outdoors, fishing, riding dirt bikes, or doing back flips off rocks or bridges into the water. But one of his greatest passions was computer gaming with many friends from all over.

If Chad wasn’t adventuring, he was spending time with Colleen Felts, his now wife. They married July 27, 2019. He was a hard nut to crack but when you did, you’d see he was a very loving, giving man, who wanted nothing more than to make sure his family was well taken care of and had everything they needed. He was a one of a kind person who will be dearly missed by all.

Chad is survived by his wife: Colleen Cummings, his children: Seth and Harper; his parents: Lori Lewis, Mary Moro, and Ben Cummings; his sister: Nicole Cummings; two nephews; and his grandparents: Tom and Virginia Lewis. He was preceded in death by his grandmother: Dorothy Floyd; and grandfather: K.C. Cummings.

A Celebration of Life will be held Saturday, September 24, 2022, at 5pm located at the Rocky Reach Dam in the upper sanctuary. We invite all family and friends to gather, share stories, and just celebrate the life he lived and the people he held dearest.

In lieu of flowers, donations can be made to the Oregon Health Science University Foundation. The family would like to thank the many doctors and staff that helped during treatments.

You are invited to view Chad’s Online Tribute at www.HeritageMemorialChapel.com where you can share a photo, a memory, and/or make a donation. Arrangements are in the care of Heritage Memorial Chapel, East Wenatchee.