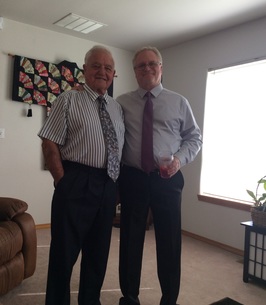 Lyman was born in Cornell, Wisconsin on January 31, 1933, to William Clesson and Esther Mae Shales and lived on the family dairy farm near Holcomb and/or Birch Creek Wisconsin. During this formative time, Lyman developed a genuine dislike for dairy cattle, milking cows before school was not what he considered a fun time. Lyman at the age of 13 in 1946, moved with his parents and siblings William (Bill), Charlotte Mae, and Donna Marie to Wenatchee WA. where the parents found work and the children attended school. Lyman attended Wenatchee high school, and during that time he joined the local Masonry apprenticeship program where he worked with his father for Vandervort and Ray Davis construction/Masonry companies.

In February 1953, Lyman joined the Army where he spent a great amount of his time going to school in Japan learning construction, then was assigned to Korea where he attained the rank of Corporal and was the company clerk, just like Radar on “M.A.S.H.” He spent most of his time in the mail room and the”P.X.”. One of his more vivid memories was of a time when for a lack of things to do, his commanding officer had him oversee the troops chip ice along the roadway, he said it was miserable and Korea was the coldest place on earth. Lyman was Honorably discharged in January 1955.

Lyman married Audrey Noreen Ahl (Mason) on July 20, 1956, and raised three sons, Todd, Tim, and Jeff where they spent most of their life in their house on 9th St. in Wenatchee. Lyman and his brother Bill successfully operated Shales Masonry for several years. The family business was well respected in the community and employed many Masons and family members over the years. Lyman and Audrey also enjoyed time in the winter at his residence on the golf course at Sun lakes Arizona, and time during the summer at his cabin by Lake Wenatchee, which he dearly loved. Lyman loved to travel, he and his wife spent many of their earlier years in the off-season traveling the west coast, playing golf with their close friends and family. Lyman will be remembered as a good business and family man, a great Mason, an excellent golfer and decent fisherman, and a good friend to many, but not so much with the carburetors.