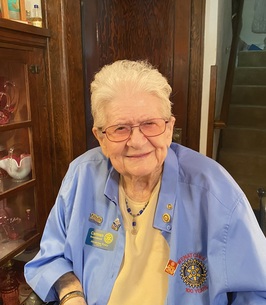 Carmen Louise Bossenbrock, 94, a lifetime Dryden resident and orchardist, passed away at her home on Sunday, July 31, 2022.

Carmen was born on May 29, 1928, in Wenatchee, as the daughter of Garrett and Olive Irene (Orcutt) Bossenbrock. She was raised and schooled in Dryden and graduated from the Dryden High School in 1947. She continued her education at WSU and later transferred colleges to Stanford University where she graduated as a Physical Therapist in 1953.

Carmen was a pioneer in the Wenatchee Valley medical field, specializing in patients with Polio. She worked at Deaconess Hospital and later at Central Washington Hospital. She became the head of Physical Therapy until retirement.

She was also the owner, manager, and loved to be in her pear orchard at Dryden.

Carmen enjoyed her friends especially Camilla Wicks and the talents her violin friend shared. After a concert, Carmen met Camilla and sent a box of Anjou pears from her orchard with Camilla and they instantly became fast friends.

She followed the men and women’s Seattle Storm and Gonzaga Basketball teams – she never missed a game.

Carmen is survived by her family of friends and family including Alice Nieman of Dryden. She was preceded in death by her parents and brother, William “Bill” Bossenbrock.

You are invited to view Carmen’s Online Tribute at www.HeritageMemorialChapel.com where you can share a memory or condolence. Friends who wish may make memorial donations in her name to the Dryden Improvement Club or Rotary International Polio Plus Fund. Arrangements are in the care of Heritage Memorial Chapel, East Wenatchee and Cashmere.