To share your memory on the wall of David Riggs Jr., sign in using one of the following options:

Provide comfort for the family by sending flowers or planting a tree in memory of David Riggs Jr.

Provide comfort for the family by sending flowers or planting a tree in memory of David Riggs Jr.

He was born in 1956, to Ariel (Crook) Riggs and David Riggs, in Spokane, where he lived until his family moved to Seattle in 1965. He graduated from Nathan Hale High School in 1974, then attended Mount Hood Community College in Gresham, Ore. He graduated from Oregon State University in 1979 with a bachelor’s degree in technical journalism.

Dave worked for the Skagit Valley Herald and the Anacortes American from 1980 to 1981, when he began work as a sportswriter for The Wenatchee World. He joined the World’s copy desk in 1990. Dave left the Wenatchee World in 2009 when he earned a Bachelor of Arts degree in education from Heritage University. He was a substitute teacher until 2011 when he was hired as the journalism teacher at Wenatchee High School. He was the advisor for the Apple Leaf student newspaper and the WaWa student yearbook.

He loved “his kids” and always said he was privileged to work with amazingly talented students. Dave loved his journalism career but said his teaching years were the best.

Before his passing, friends compiled memories from his students. Among them:*
— “After all these years, I still feel lucky to have had such a determined, dedicated, kind teacher during such an impactful time in my life.”
— “You cannot imagine the great deal of good you’ve done, or the amount of joy you’ve created. Thank you for all of it. I love you.”
— “I am now an elementary teacher and try my best to live up to Mr. Riggs’ glowing example.”
— “He has a way of making everyone feel important.”
— “I credit you as my reason for getting through the hardest year of my life.”
— “Thank you so much for caring about every single student you’ve had like they were your own kid.”
— You were always there for me, always told me you were proud of me, always put a smile on my face.”
— In the chaos of Wenatchee High School, I felt peace walking into third period Apple Leaf and seeing your smiling face.”

In 1983, Dave married Dolores “Dee” Anslow and they made their home in Wenatchee where his wife was also employed as an editor and reporter at The Wenatchee World.

Dave and Dee retired in 2017 and immediately went off to Australia and New Zealand, which was Dave’s dream trip. Other travels took them to Switzerland, Bonaire, Grand Cayman and Costa Rica and the national parks in Utah.

Dave was past president of a nonprofit women’s pregnancy care organization, and past president of the Wenatchee Valley Men’s Softball Association. For several years, he ran local men’s softball and boy’s baseball tournaments. He also was secretary for the Washington Journalism Education Association, and taught journalism at conventions and summer camps. In 2016, he was named one of four Distinguished Advisers in the Dow Jones News Fund National High School Journalism Teacher of the Year competition.

Dave was a lifelong Christian and a member of St. Joseph’s Catholic in Wenatchee.

Dave was preceded in death by his son, J.D. Riggs, in 2012. Survivors include his wife, Dee; his daughter, Anna Riggs, of Redmond; and his brother, Brian, of Morton.

A funeral Mass will be held at 2 p.m. Thursday, June 24, at St. Joseph’s Catholic Church in Wenatchee. A celebration of life will follow at 3 p.m. in the church hall.

In lieu of flowers, donations may be made to the J.D. Riggs Memorial Scholarship Fund through the Community Foundation of North Central Washington (cfncw.org).
Read Less

To send flowers to the family or plant a tree in memory of David Lee Riggs Jr., please visit our Heartfelt Sympathies Store.

Posted Jun 11, 2021 at 01:08am
Sorry to hear about Mr. Riggs. Please accept my sincere condolences for the loss of a special person who touched the lives of many in such positive ways and was much appreciated by all. May the wonderful memories of Mr. Riggs continue to provide his family with comfort, In God's care, he rests. Isaiah 26:19; Psalm 37:11, 29
Comment Share
Share via:
MP

Posted Jun 09, 2021 at 12:28pm
Dee and Anna,All my thoughts and prayers to you. Dave made a huge impact on me and all he knew and is simply irreplaceable. Wishing you comfort,

Posted Jun 08, 2021 at 10:38pm
Dee and Anna...
My deepest condolences for your loss. Dave was always a class act: a wonderful co-worker at the World and a great friend. I helped him with the website for his fast-pitch youth softball tournaments several years ago and Dave made that experience so much fun.
Dave will always be with us in spirit and we'll keep memories of him close to our hearts.
Linda Barta
Comment Share
Share via: 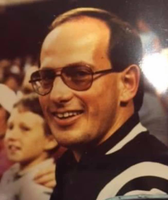