To share your memory on the wall of Danny \"Dan\" Adams, sign in using one of the following options:

Dan worked for Sampson Orchards, Mad River Packing Warehouse, and Bethlehem Construction. He was owner and partner of 5th Addition Fabrications. He then worked for Rumble-Adams Partnership before he became owner of Adams Orchard.

He was always know to run on Dan time which meant he’d “get around to it”.

He took pride in his 1969 Mustang Fast Back and his great nieces. He was a charter member of the Sons of the American Legion Post 10 Wenatchee. For fun he enjoyed snowmobiling, camping, hunting and fishing. He was lucky to have some friends and family who he spent time with including Mike Adams, Joe Stegeman, Steve Knowels, Darrin Reeves and Peter Grentz.

He was preceded in death by his parents and baby sister Dorothy.

To send flowers to the family or plant a tree in memory of Danny "Dan" Gene Adams, please visit our Heartfelt Sympathies Store.

There are no events scheduled. You can still show your support by sending flowers directly to the family, or planting a memorial tree in memory of Danny "Dan" Gene Adams.
Visit the Heartfelt Sympathies Store

We encourage you to share your most beloved memories of Danny "Dan" here, so that the family and other loved ones can always see it. You can upload cherished photographs, or share your favorite stories, and can even comment on those shared by others.

Posted May 24, 2021 at 09:11am
My favorite and certainly most cherished memory of Dan is from 2007 when my husband Mike, Dan's cousin took me over to meet the family. On our trip from the Omak area to Monitor and Mike knowing I'm a social butterfly, politely let me know more than once that Dan was not a "talker" so to not take it personally, I was well prepared. Dan and I talked our entire visit🤣.
So all I heard on our return trip home from Mike was: " I can't believe Dan talked that much", he's never talked that much. He never talked that much to ME! I felt pretty special that day.
It was a great honor and feel truly blessed to have had Dan in our lives and for him to serve as best man at our wedding.
We love & miss you ❤ 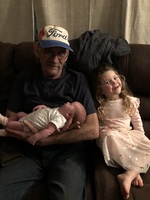 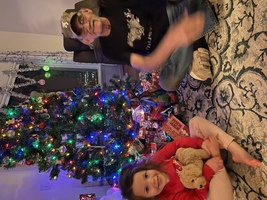