To share your memory on the wall of Milton Bohart, sign in using one of the following options:

Milton Hilber Bohart, 89, of Shoreline WA, passed away peacefully in his childhood home on Wenatchee Heights surrounded by his family on March 30, 2021 due to a brief illness.
Milt was born June 3, 1931 to Millie and Hilber Bohart in Wenatchee. Life on the family farm instilled in him the value of hard work, determination, resourcefulness, and commitment to family.

From his early education in a one room schoolhouse to the halls of the University of Washington, Milt knew he wanted to be a mechanical engineer. He had a long and successful career designing hydraulic cylinders used in mining, logging, tunnel boring, and construction. He took great pride in his own engineering company from which he, frankly, never retired.

During Milt’s education years, he was a very accomplished football player. He was inducted into the Wenatchee High School Hall of Fame, the University of Washington Hall of Fame, received the Look All American and Guy Flaherty awards. Later, he truly enjoyed supporting his Purple and Gold (Go Dawgs!) at Husky Stadium.

A beautiful girl, Ann Henry, caught his eye when she purposely dropped her books in front of Milt so she could meet him on the UW campus. Thus, started a wonderful story of love for over 60 years. Together they enjoyed traveling and fly fishing with family and friends to destinations near and far. Milt’s membership at the University Club, Seattle Golf Club, and Sigma Chi Fraternity kept him close to many special friends.

After college Milt graduated from Air Force Pilot School. He flew many North European and Arctic route missions in C-118/DC6 aircraft. He received his honorable discharge from the Air Force after 3.5 years of service.

Milt’s family is most appreciative of the caring, compassionate, and professional team of Confluence Health Hospice during our time of need.

At Milt’s request, there will be no service. In lieu of flowers, memorials may be made to WHS’s Milt Bohart Football Determination Award and Scholarship at Wenatchee High School 1101 Millerdale Avenue Wenatchee WA 98801.
Read Less

To send flowers to the family or plant a tree in memory of Milton Hilber Bohart, please visit our Heartfelt Sympathies Store.

There are no events scheduled. You can still show your support by sending flowers directly to the family, or planting a memorial tree in memory of Milton Hilber Bohart.
Visit the Heartfelt Sympathies Store

We encourage you to share your most beloved memories of Milton here, so that the family and other loved ones can always see it. You can upload cherished photographs, or share your favorite stories, and can even comment on those shared by others.

Posted Apr 15, 2021 at 05:11pm
Hello Don-
Remembering your father as coach of the Bitter Lake “B” football team and taking us into Husky stadium to watch practice and visit the locker room. Players Harvey Banks and Al Worley come to mind. Your Dad was a kind and humble man.
Brent Knight

Posted Apr 08, 2021 at 01:08pm
A shock and a loss. I'll miss you and Ann and the good times we had at Family Reunions. The picnic by the Boise River. Cooking meals at Carriage Hill. The good fellowship, food and wine. Your cousin, David Bohart
Comment Share
Share via:
HS

Posted Apr 07, 2021 at 03:19pm
Our deepest sympathy to the family of Milton H. Bohart. The Mechanical Engineering family at the University of Washington are forever grateful to Milt 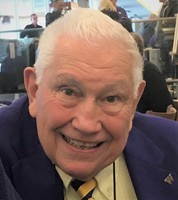