To share your memory on the wall of Owen Talkington, sign in using one of the following options:

Owen Russell Talkington, 72, of Wenatchee, WA, passed away March 9, 2021 as a result of complications brought on by Covid-19.

Owen Russell Talkington, 72, of Wenatchee, WA, passed away March 9, 2021 as a result of complications brought on by Covid-19.

He was born in Dickenson, North Dakota on October 6, 1948. He leaves behind his devoted wife of nearly 25 years, Sharon, here in Wenatchee. Also, two sisters, two daughters, two grandsons and a granddaughter all of Montana as well as sons, grandchildren, and great-grandchildren of Sharon whom he bonded with over the years.

He came to the Wenatchee area from Montana to work as a surveyor for Horton Dennis for many years and when the company closed its doors, he worked for Gaurdsmark as a security guard at Alcoa and later at T-Mobile data center in East Wenatchee. He retired just before he had to have 4-way bypass surgery which drastically slowed him down.

He had a great love of the outdoors and in younger years was a guide in the Montana mountains. After marriage to wife Sharon, he enjoyed doing whatever he could for her folks at their Gold Creek property.
He made annual trips to Montana to visit family, and in 2019 fulfilled a bucket list trip to the Grand Canyon via railway.

In July of 2020 was hit with Covid-19 keeping him at CWH for 22 days with emergency ostomy surgery, and then rehab in Leavenworth for another 23 days. There was intent to have an ostomy take down in Oct. 2020, but he had a TIA which postponed it until Dec. 2020 and then had to be postponed again due to the hospital being filled with Covid patients. It was rescheduled for Jan. 22, 2021 and since his colon had been inactive for so long it took a little longer to wake up, and on the 9th day (March 3rd) he was able to come home. On March 9th he was still not recovering according to plan, went to see his doctor who sent to the ER because he was dehydrated due to diarrhea. After IV's were started and a potassium drip, his heart began to fail and after extensive CPR couldn't revive his heart he was pronounced dead.

His cremation was handled by Smart Cremation, and a Memorial service will be held later at his church, Wenatchee Valley Christian Center.
Read Less

To send flowers to the family or plant a tree in memory of Owen Russell Talkington, please visit our Heartfelt Sympathies Store.

There are no events scheduled. You can still show your support by sending flowers directly to the family, or planting a memorial tree in memory of Owen Russell Talkington.
Visit the Heartfelt Sympathies Store

We encourage you to share your most beloved memories of Owen here, so that the family and other loved ones can always see it. You can upload cherished photographs, or share your favorite stories, and can even comment on those shared by others.

Posted Mar 25, 2021 at 02:22pm
Owen was a great guy where family came first. Pretty funloving, also. Our condolences to the family and prayers to them.
Comment Share
Share via: 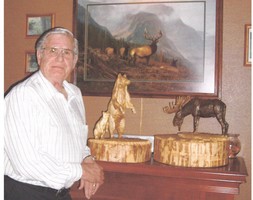