To share your memory on the wall of Calvin \"Cal\" Prater, sign in using one of the following options:

Cal was born on August 17th, 1934 to Dean and Martha Prater in Mitchell, South Dakota. He migrated with his parents to Washington State in 1936. In August of 1955, he married the love of his life, his high school sweetheart, Amedee Rondeau. They were married over 65 years, have five children, nine grandchildren, and eight great grandchildren.

He was an outstanding athlete and played college football at Everett Junior College. His love for sports kept him involved as either a coach, an enthusiastic fan in the stands for his children, or later in life, as a player on a community slow-pitch team. You may have even caught, “Big C”, as his friends called him, around a pool table boldly challenging anyone willing to step up and play. Cal was also an outdoor enthusiast by nature. He loved hunting, fishing, hiking, and camping with his family. Anything to do with the mountains, lakes and wilderness brought him joy which he passed on to his five children. He taught all nine of his grandchildren to fish which continues to foster a legacy of loving and respecting nature.

His appreciation of the great outdoors led him to pursue a career in forestry. Graduating from the University of Washington in 1959, Cal spent nearly 40 years as a forester in Washington, Arkansas and North Carolina with companies such as Weyerhaeuser, WI Forest Products, and Barbee Lumber Mill. Whether involved with logging, road building, reforestation, or woods management, Cal was admired and respected by those who worked with him and for him. The respect was mutual as he expressed great appreciation for those hard-working loggers who made it all happen.

A generous man who was always willing to help others even at his own expense, Cal modeled to his family how to work hard, live large, and love deeply. His pride in and love for his family often brought him to tears which he would quickly wipe away with a big red handkerchief. He delighted in spending time with his family; could laugh until he cried, and cry until he laughed. His great grandchildren found safety snuggled in his strong arms and found butterscotch candy in his pockets. He will be greatly missed.

To honor his wishes, no services will be held at this time. The family would like to thank the staff at Colonial Vista for the compassionate care over the last 4 years and all of those who have sent their well wishes.
Read Less

To send flowers to the family or plant a tree in memory of Calvin "Cal" Dean Prater, please visit our Heartfelt Sympathies Store.

There are no events scheduled. You can still show your support by sending flowers directly to the family, or planting a memorial tree in memory of Calvin "Cal" Dean Prater.
Visit the Heartfelt Sympathies Store

We encourage you to share your most beloved memories of Calvin "Cal" here, so that the family and other loved ones can always see it. You can upload cherished photographs, or share your favorite stories, and can even comment on those shared by others.

Posted Apr 04, 2021 at 03:33pm
What an incredible gift Cal was to all of us who had a chance to know him, hug him & experience his warm & inviting spirit! Sending our Love.

Posted Apr 02, 2021 at 11:28pm
So sorry for your loss of Calvin, Amedee, and family. We grew up just down the hill from Calvin and Glen. We were the "Olson" kids!!! I remember you from school. I kept informed about you all in Wenatchee, from my sister Evelyn. I live in Lynnwood. Of the 7 of us kids there are 4 of us remaining. I will keep you all in my prayers.
God bless!!!
Lillian {Olson} Bruce
Comment Share
Share via:
LB

Posted Mar 07, 2021 at 11:48am
Hugs to all the Prater family. What a great family man he was. So many fond memories of hanging out with the Prater family, camping and fishing. Just thinking of his huge laugh makes us smile. Cal would give you the shirt off his back if the thought you needed it. Always a giving person. Love to you Amadee.
Vince and Lesa Bland
Comment Share
Share via:
HT

Posted Mar 06, 2021 at 06:22pm
So sorry for your loss. Cal was an awesome and loving man. Thinking of you and your family. Sending hugs and prayers.
Heidi Toigo (Christensen)
Comment Share
Share via:
TB

Posted Mar 04, 2021 at 12:54pm
I have so many memories of Mr. Prater (Cal) from my childhood. I was in the same grade as Neal and our families spent lots of time at each others homes. Time spent at the De Queen Country Club swimming, golf cart races and luaus...................
I also have great memories of visiting them after they moved away and spending some time in Topsail Beach. Mr. Prater was a wonderful man and I know he will be missed by all. I know he and my Mom are getting caught up and talking about old memories up there. My love and prayers go out to all the family.
Terri Hancock Bunger
Comment Share
Share via: 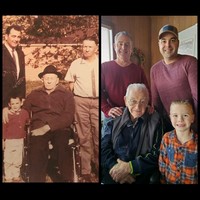 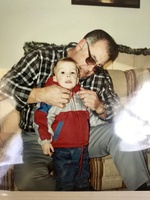