To share your memory on the wall of Carlton Nash, sign in using one of the following options:

Carlton Westaver Nash was born October 17, 1946, in Portsmouth, NH, to Carl and Claudia (Simmons) Nash. The family moved to Chelan, WA. After his father passed, Carlton and his mother moved to Cashmere, WA, where he became known as "Charlie" to his classmates. Carl graduated from Cashmere High School with the class of '65 and served as student body president his senior year.

From 1966-1973, Carl served in the United States Navy. As an electronics technician, Carl made two cruises to Vietnam aboard the USS Union. Always a proud veteran, Carl belonged to and supported veteran organizations and causes throughout his life.

High school sweethearts, Carl and Susan (Williams) married in Cashmere in 1968. Daughter Trisha joined their family while living in San Diego. Upon Carl's discharge, they returned to build their life in Wenatchee.

Carl became a Wenatchee Police Officer, serving from 1973 to 1993. Whether on patrol or in the detective role, he loved looking out for his city and its residents, always treating people fairly with kindness and respect. While serving as sergeant, his shift affectionately nicknamed him "Sergeant Sir.” Carl developed a lifelong bond with fellow crime fighter Ron Crist during their years together at the Wenatchee Police Department. We know they are on patrol together again.

Carl enjoyed backpacking with his family in the Cascades. He was an avid reader and researcher, particularly in history and military topics. It took very little to get him sharing stories, information, and opinions. Always a patriot, Carl believed in our country and Constitution. He especially loved time spent with his grandsons Duncan and Colin, encouraging them in sports and playing at Lake Chelan. Our extended lake family crowned Carl "King of the Dockaholics".

Carlton's parents preceded him in death. He leaves behind wife Susan (Wenatchee), daughter Trisha Nash (East Wenatchee), and grandsons Duncan and Colin Ward. He is also survived by sister and brother-in-law Carla Joan and Glen Brownlee (Wenatchee), nephews Micheal and Kevin Brownlee, and mother-in-law Lois Wiliams (Wenatchee), Other survivors include Jeff Ward (Wenatchee), step sisters Helen Lofgren (Spokane) and Elizabeth Perry (Chelan). Carl had a unique collection of dear friends that he valued greatly. You know who you are.

Memorials in honor of Carl may be made to organizations serving our veterans. Carl did not want a funeral. We will honor his memory at a later date.
Read Less

To send flowers to the family or plant a tree in memory of Carlton Westaver Nash, please visit our Heartfelt Sympathies Store.

There are no events scheduled. You can still show your support by sending flowers directly to the family, or planting a memorial tree in memory of Carlton Westaver Nash.
Visit the Heartfelt Sympathies Store

We encourage you to share your most beloved memories of Carlton here, so that the family and other loved ones can always see it. You can upload cherished photographs, or share your favorite stories, and can even comment on those shared by others.

Posted Feb 02, 2021 at 12:00am
So sorry to hear of Carl's passing. I had the pleasure of working with him for many years. Carl was a wonderful person and truly cared for all.
Comment Share
Share via:
AN

Posted Feb 01, 2021 at 12:46am
In 1983, I was 13 and a runaway. I was arrested by Sgt. Nash. I was taken to the station and interrogated by him and his partner, Sgt. Kenneth Mankee (sp?). They were both very nice to me. I remember Carl asking me about myself. He was very caring, wanting to know why I was caught up in the mess I was in and living on the streets. He said he could see I was a good kid. He gave me his card in case I ever needed anything. They took me to the office where I would be placed in a foster home and left. After they left I bolted. We would run into one another a few more times the next couple of years. Sometimes him arresting me or my boyfriend or me calling him for advice. By the time I was 16, I was back on track but had been through a lot. He had been my friend through it all and remained my friend for the rest of my life. I called him for every success to let him know he had not wasted his time being there for me. He left a note on my car telling me he was proud of me the night of my H.S. graduation before going off to CWU. He was my biggest cheerleader from the day he handed me his card til I got my Mater's degree. He talked to me anytime I called even if it was the middle of the night. He was there for me for every obstacle and every success. He never gave up on me so I never gave up on me because I didn't want to let him down. I am 51 now. He helped me when I lost my daughter when I was only 14, when I celebrated the birth of my son when I was 16 and my next daughter when I was 34. He saw me through DUI'S and getting my Master's and becoming a DMHP, LMHC, and a Mental Health Therapist where I have been doing the same for others what he has done for me. I loved him. I will miss him. I am so sorry for his family! Love and prayers.
Comment Share
Share via:
AN

Posted Jan 29, 2021 at 04:41pm
Sue,
I was saddened and shocked to see Carl's notice in the paper. There no words to make your grief and loss any less. Please know Judy and myself are here for you in any way we can help.
Carl was a loquacious and generous man and we were lucky to enjoy his (and your) friendship. To think it all began with Harriett.
Though we never served together I am proud to call him Shipmate. Fair winds and following seas Carl.
Comment Share
Share via:
M

Posted Jan 28, 2021 at 11:35pm
Carlton was a kind & generous man. I have many happy memories of visiting with him in Lake Chelan. He loved to laugh and share stories with family, friends, his beloved grandkids, his daughter and wife. He was surrounded by so much love. He will be greatly missed.
Comment Share
Share via: 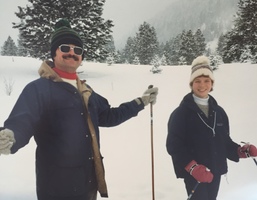 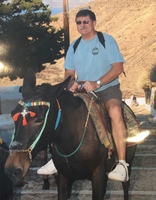