To share your memory on the wall of Robert \"Bob\" Eadie, sign in using one of the following options:

Bob was born on May 10, 1927 in Salamanca, New York to Thomas Currie & Ruth (Shearer) Eadie. He was raised in New York and enlisted in the U.S. Navy in 1945. He earned the rank of Seaman Second Class and received an honorable discharge for his service.

Robert met and was married to Shirley Foos on June 10, 1950 in Rochester, NY. They moved in 1952 to Whittier, California to make their home. Later moving to La Habra, he worked as a heating and air conditioning Technician. Then in the mid 1980’s they moved to Washington. They purchased and operated a Bed & Breakfast in Peshastin. In 1999, they sold their Bed & Breakfast. In 2005, Robert and Shirley moved to Leavenworth.

In their retirement, Robert and Shirley like to spend their winters in their RV at Oceanside, California on the beach. On February 14, 2016, Robert was preceded in death by his wife Shirley M. Eadie. Bob loved to can the vegetables from his garden and make jams and jellies from his berry bushes for his friends.

There will be a funeral mass and graveside inurnment announced at a later date.
Read Less

To send flowers to the family or plant a tree in memory of Robert "Bob" Currie Eadie, please visit our Heartfelt Sympathies Store.

There are no events scheduled. You can still show your support by sending flowers directly to the family, or planting a memorial tree in memory of Robert "Bob" Currie Eadie.
Visit the Heartfelt Sympathies Store 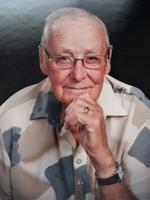