To share your memory on the wall of Tommy Grebb, sign in using one of the following options:


Tommy Dean Grebb, age 69, peacefully passed away, September 1, 2020, after an 11 year battle with Parkinson's, surrounded by his adoring family at his home in East Wenatchee, WA,

The extended Grebb family moved to Quincy, WA, to farm when Tom was 5 yrs old. Tom loved life and was known for his warm, optimistic personality and big smile. His great sense of humor helped him, and those around him, to cope and find joy on the hardest of days.

The Quincy Valley cultivated Tom's love for agriculture and blessed his life with many wonderful friendships. He graduated from QHS in 1969. Tom always felt endeared to the community that he grew-up in. The Class of '69 left behind way too many good stories that were often repeated when we needed a good laugh. Before graduation, Tom joined the Quincy Fire Dept. as a volunteer and continued to serve for over 25 years.

In the early 70's, Tom started his own construction business, putting in hundreds of miles of concrete irrigation ditches throughout Central WA. He spent his free time participating in one of his favorite recreational sports, snowmobile racing, where he unknowingly raced against his future father-in-law, Tom Yamamoto.

Tom married Camille Yamamoto in 1977, at Ohme Gardens, in Wenatchee, WA. Soon after, on a whim, Tom put in a ridiculously low bid for a church parsonage that needed to be moved. After being informed he was the only one who put in a bid and was now the proud owner, the house was moved across town to it's H Street location where they happily resided for the next 39 years.

Their pride and joy, Chase Thomas, was born March 20, 1985. Tom couldn't wait to get Chase out in the fields for driving practice…starting when Chase couldn't even see over the steering wheel. Often, Tom would read the newspaper or farm journals in a gentle, sweet voice to Chase as if they were children's storybooks.

Throughout Tom's professional career, knowing and working with local farmers was his favorite part of his job. For many years, he especially enjoyed meeting the guys for coffee at The Turf.

With the partnership of his parents and brother, Central Bean Co., Inc. opened it's doors in 1983. With Tom's oversight and creative vision for growing the business, the company was well known in the dry bean industry for its high-quality beans and seed production capabilities. They were one of the first to offer Identity Preservation and to become Food Alliance certified. Central Bean Company proudly earned the Non-GMO Project’s verification standard.

Through the years, Tom found time to serve on the Quincy City Council, U.S. Jaycees (both locally and at the State level), Rotary International, WA State Ag-Forestry program, Class X, and the U.S. Dry Bean Council. He even ran for Quincy's Mayoral seat during the 1985 campaign.

Tom took great interest in the science side of Beans. His association with the Bean Improvement Cooperative put him in a position to work with scientists in their work with breeding and genetic research and development.

Travel was an big part of Tom's life. As a member of the US Dry Bean Council, Tom made many trips to Washington D.C. And to many states across the U.S. International Business took him to Costa Rica, Puerto Rico, New Zealand, Australia, and Canada.

One annual trip he never wanted to miss was Bean Hole Day's in Pequot Lakes, MN. Great friendships were built because of beans. To all of his bean colleagues, thank you for your friendships and for giving Tom so many cherished memories and opportunities.

Tom's serious health issues began with open heart surgery in 2005. Parkinson's was confirmed in 2009, had two Deep Brain stimulators implanted in 2015, followed by more surgeries and medical procedures. In 2015, Tom's health issues were becoming more difficult to manage and the decision was made to move closer to medical resources in Wenatchee.

He was proceeded in death by his father, Don; Grandparents: Al and Mary Grebb and Jacob and Hannah Winter.

Tom truly missed Central Bean and it's employees. Thank you, to each of you, for your dedication and for putting your best efforts into your work. Tom was proud to be your employer.

Our deepest appreciation to Calvin, Claudia and family for their enormous love and support. Heartfelt thanks to the Fred Hobbs family for your countless visits that brought laughter and joy to Tom's days. Thank you to Tom's many Nurses and Caregivers over the past 4 years, and to the amazing Confluence Hospice team. Our heartfelt gratitude to Charlotte Martinez, Alan Sotelo, Mia Christensen and Alan Leon for filling Tom's last 3 months with an abundance of tender, loving care. May God bless you all.

A Riverside Memorial will take place in October (details will be determined).

In Leu of Flowers, memorial donations can be designated to Confluence Health Hospice or Bean Improvement Cooperative.

Checks made out to:


In Memory
It broke our hearts to lose you,
but you did not go alone.
A part of us went with you,
the day God took you home.
If tears could build a stairway,
and heartaches make a lane,
We'd walk our way to heaven,
and bring you back again.
In life we loved you dearly,
in death we love you still,
In our hearts you hold a place
no one could ever fill.
Read Less

To send flowers to the family or plant a tree in memory of Tommy Dean Grebb, please visit our Heartfelt Sympathies Store.

There are no events scheduled. You can still show your support by sending flowers directly to the family, or planting a memorial tree in memory of Tommy Dean Grebb.
Visit the Heartfelt Sympathies Store

We encourage you to share your most beloved memories of Tommy here, so that the family and other loved ones can always see it. You can upload cherished photographs, or share your favorite stories, and can even comment on those shared by others.

Posted Sep 09, 2020 at 10:59am
Tom's patience and quiet determination was on full display while ice fishing in N Minnesota some years ago. We all enjoyed that day of comraderie and laughter with others in the dry bean industry. One of the finest friends we have. 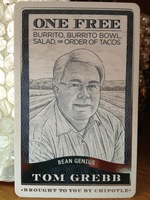 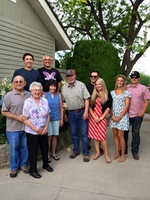