To share your memory on the wall of Thomas Baldwin, sign in using one of the following options:

Tom Baldwin of Cashmere Washington died on Thursday, June 18th, 2020 at the age of 73 after a short battle with cancer. Tom leaves behind his wife Joan, of 52 years; his daughter Michelle... Read More
Thomas Michael Baldwin
Cashmere, Washington

Tom Baldwin of Cashmere Washington died on Thursday, June 18th, 2020 at the age of 73 after a short battle with cancer. Tom leaves behind his wife Joan, of 52 years; his daughter Michelle East (Carl), two grandchildren, Peyton and Tanner; and his son Casey Baldwin (Shelley), and grandchildren, Landon, Colton, and Jamison.

Tom was born and raised in Ohio and graduated from The Ohio State University, where he met and married Joan. After graduation he joined the Army and was deployed to South Korea on the DMZ as a 1st Lieutenant in the Armored Division. Tom spent most of his career as a regional sales manager for FASCO Industries in Michigan, Missouri, Connecticut, and Colorado. After retiring at age 55, Tom and Joan moved to Cashmere to be near their children and grandchildren. Tom then began his own business: Edgewise - sharpening scissors and knives through-out Washington and Idaho.

While being a devoted husband, father, and grandfather, Tom’s passion included traditional bowhunting and the history of archery throughout the world. He had a vast collection of traditional bows, books, magazines, and historical photographs. Nothing brought him more satisfaction than sharing his vast knowledge of the history of archery with others.

His hunting adventures took him from the Northwest Territories of Canada to South Africa and many places in between. He loved chasing bugling elk through the mountains in Idaho and Colorado and the tranquility of sitting in a whitetail deer stand on a farm in Michigan. However, he was most proud of his time spent above timberline in Colorado pursuing bighorn sheep and mountain goats. He would tell you that it was not the places he hunted or the pursuit of animals that were important, but the friends and family with which he shared those experiences. He had many life-long friends and exceptional hunting companions.

Tom will be well remembered for his kindness and generosity. He accepted volunteer leadership roles in organizations including the Cashmere Museum, Traditional Bowhunters of Washington, and the American Broadhead Collectors Club. He shared his passion for archery with countless youth teaching archery at various events including Apple Days, the Salmon Festival, Founders Day, and Burn Camp (a weeklong event for kids who have survived burn accidents).

The legacy of his honesty, dedication, love of family and enormous heart lives through the deeds and actions of those who knew him.

A memorial service will be held in May 2021 at Ingalls Creek Enrichment Center.

To send flowers to the family or plant a tree in memory of Thomas Michael Baldwin, please visit our Heartfelt Sympathies Store.

Print
A memorial service will be held in May 2021 at Ingalls Creek Enrichment Center.

We encourage you to share your most beloved memories of Thomas here, so that the family and other loved ones can always see it. You can upload cherished photographs, or share your favorite stories, and can even comment on those shared by others.

Guaranteed hand delivery by a local florist
WE

Posted Jun 27, 2020 at 12:52am
We laughed , goofed , told and re-told stories and actually managed to tag a few bears.
In between all of the chips, beers and naps !
I won't forget Tom " Big Daddy" Baldwin. I'll see you when it's my turn ol' friend.
Comment Share
Share via:
TM 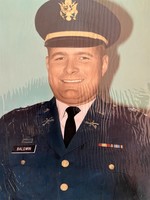