To share your memory on the wall of Billy Foster, sign in using one of the following options:


Billy Joe Foster, 72 years old, passed away on Friday, June 12th in the arms of his son and daughter after losing a courageous battle with cancer.


Billy Joe Foster, 72 years old, passed away on Friday, June 12th in the arms of his son and daughter after losing a courageous battle with cancer.

He was born in East St. Louis, Illinois to Uhland C. Foster and Freda J. Ermert on July 9, 1947. He attended Buchanan High School in Troy, MO. He later received a degree from the Dallas Institute of Mortuary Science in Kansas City, MO.

He eventually made his way to Washington state in 1979 where he met and married Linda L. Winrow. They welcomed a daughter in 1981 and a son in 1984 whom he took great pride in and loved immensely. He worked for a variety of companies including Boeing, Seattle P.D., Fleetwood homes, and Cooper homes which brought him to Wenatchee WA. In the end, his passion for helping others with Legal matters led him to self-employment through his Pre-Paid legal business, later known as Legal Shield.

Bill lived a simple life that revolved around his loved ones, church, his business, and fascination for sports, trains, and current events. Anyone that knew him, experienced an unrivaled level of kindness, love, and support. Encouraging advice or a prayer was always just a phone call away. He will be greatly missed by many.

Bill Foster is survived by his Brother, Dr. George Foster and his wife, Elena Foster of Henderson NV. Daughter, Stephanie (Nikki) Foster of Marysville WA and her children, Austin Foster, Kayden Verkerk, Mckenzie Verkerk. Son, Sean Foster of Wenatchee WA, his wife Deborah Foster, and their children, Dempsey Foster, Elmie Foster. His Nephews and Nieces whom he cherished, Becky Hookland, Brenda Gallagher, Jimmy Blubaugh, Mark Blubaugh, Danny Blubaugh, George Foster III, Amanda Foster, Alex Foster, Julliette Villeme, and Valeriya Nogotkova. He leaves behind many great and great-great nieces and nephews as well. He is preceded in death by both of his parents and a beloved sister, Kay Tapio.

A celebration of his life will take place at Foothills Foursquare Church in Wenatchee WA on July 9th at 2pm which would have been his 73rd birthday. Service may be modified to remain compliant with state guidelines as of that date. Facial coverings and social distancing highly suggested.

You are invited to view Billy’s online tribute at www.HeritageMemorialChapel.com to share a memory or leave a condolence. Arrangements are entrusted to Heritage Memorial Chapel, East Wenatchee and Cashmere.
Read Less

To send flowers to the family or plant a tree in memory of Billy Joe Foster, please visit our Heartfelt Sympathies Store.

We encourage you to share your most beloved memories of Billy here, so that the family and other loved ones can always see it. You can upload cherished photographs, or share your favorite stories, and can even comment on those shared by others.

Posted Jul 08, 2020 at 10:12am
To a wonderful friend, mentor & have blessed many. You leave our family with wonderful memories. We'll miss your warm smile. God bless your family

Posted Jul 06, 2020 at 11:04pm
Bill was a great dad and a great friend with great hugs for all of us Bill loved the lord and will be missed so much cheers to Bill one of the good ol boys that made life a treasure
Comment Share
Share via:
HC

Posted Jun 23, 2020 at 04:48pm
From Sandra (Sandy) Case:
Many years ago, Bill helped me and my husband Roger (now living at Colonial Vista) to move and get our own home. And Bill was a huge blessing to us throughout the following years. If it hadn't have been for Bill, we don't know how we would have made it. We are both so sorry to hear that he passed away. Bill is such a wonderful wonderful man. God bless him on his walk home and God bless his family.
-Sandy & Roger
Comment Share
Share via:
LS 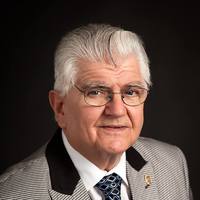