To share your memory on the wall of John Kammeyer, sign in using one of the following options:

John accomplished much in his life; in 1977 he served a two-year mission for his church in Germany; he graduated from Brigham Young University in 1984 with a BA in political science and a minor in German. He was commissioned in the Army Reserve an Intelligence officer and received an honorable discharge. He continued his studies and received his Juris doctor (JD) from Northwestern School of Law in Portland, Oregon, in 1988. He practiced family law for three years in Lynnwood, Washington, but found the practice of law was much less satisfying than the theory. When John and Anne were married, he was closing out his law practice and found a job in customer service which he worked in for the next fifteen years. His health problems determined an early retirement and he concentrated his efforts on holding down the fort on the home front. He and Anne were a team and worked together to make a living, raise their three children and make their house a home for their family.

Besides his wife and children, his passion was reading, writing books that filled his imagination and studying. He loved learning new languages and studying the culture behind the language. He was a scriptural scholar; he learned as much about ancient cultures and languages as he could, which enhanced his study of the Bible and Book of Mormon. It was not a surprise that John was also immersed in his family genealogy. He was always in the process of writing or editing a book. Three of his most accomplished books are: “The Book of Exodus: an Israelite Endowment,” “Warfare in Mesoamerica: Battle in the Book of Mormon,” and “The Nephite Art of War.”
https://www.smashwords.com/profile/view/Coriantumr

He was known for his wry sense of humor, wealth of knowledge, and humble manner. He underestimated his value and influence in the world. But his family knew that “no other success can compensate for failure in the home.” John was an amazing success as a husband, father, and disciple of Jesus Christ.

John had a private burial in Edmonds, Washington and there will be a memorial service, both in the Wenatchee and the Seattle areas when it is safer to meet in groups due to the pandemic and subsequent restrictions on social gatherings.

In lieu of flowers, the family would ask you to donate to the John Kammeyer Memorial at:
paypal.me/JohnKammeyerMemorial
Read Less

To send flowers to the family or plant a tree in memory of John Eric Kammeyer, please visit our Heartfelt Sympathies Store.

There are no events scheduled. You can still show your support by sending flowers directly to the family, or planting a memorial tree in memory of John Eric Kammeyer.
Visit the Heartfelt Sympathies Store

Posted Jun 24, 2020 at 01:37am
It was a pleasure to watch you two grow in love and grow your family. John's writing is deep and inspiring, and a wonderful legacy to the world. His ability to explain complicated things was amazing! Anne, may you and the kids feel him near as you shift from counting the days apart to the days until you are reunited. Much love to you all❤
Comment Share
Share via:
MK

Posted Jun 23, 2020 at 06:13am
John had an incredible, deep, deep bass voice. Although he was usually soft spoken, when he turned the volume up, it really carried. This one time, I was working late at Safeway just north of Seattle, I was coming home about midnight from the late shift. Someone didn’t like the way I changed lanes and began tailgating me with their light on high. I was terrified and didn’t know what to do. So I drove home with the idea of dashing inside before anything could happen. But they were too fast and as I got out of my car, a couple strange guys got out of theirs. At that exact moment, John and James came out for a midnight run. In his deep base voice, John called out, “WHAT’S GOING ON HERE!?!?” The strangers started to babble, got in their car and drove away. My heroes!!
Comment Share
Share via:
MD

Posted Jun 17, 2020 at 06:51pm
I think my fondest memory of John, goes all the way back to New Year's Eve 1987/88. I may recall incorrectly, but I believe John was living in Oregon at the time. I was living and working in Eureka, CA, going through a divorce, and my entire life was caving in, and collapsing on me. Somehow, John had managed to get in touch with another friend, in Piñon Hills, and the two cooked up a plan. Chuck, (Piñon Hills) bought tickets, and then informed me he was taking me to a Sci-Fi/Fantasy Convention happening at the LAX Hilton over New Year's. I said I wasn't in the mood, he then explained that he hadn't asked if I wanted to go, John would be picking me up the next day, so I was to get ready. Basically, my friend John kidnapped me. If you've never been to one of these events, they cannot be described very well without using your hands. It was crazy, but, believe it or not, it turned my entire life around. My friends showed me, in a way unique to them, that my life was not over. A little over three years later, John was one of the witnesses at our sealing in Oakland, CA. Though we've been in and out of touch since then, I count John as one of the best friends I have ever had. I shall miss his wry sense of humor, and his sense of the ridiculous. Chì mi a-rithist thu, mo charaid.
Comment Share
Share via: 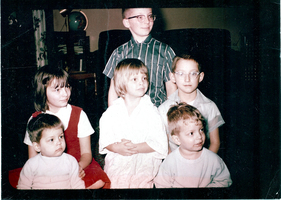 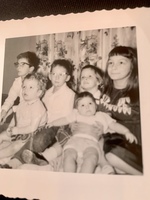 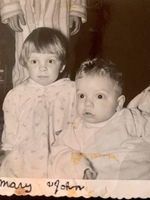