To share your memory on the wall of Robert \"Bob\" Jaspers, sign in using one of the following options:

Robert J Jaspers, age 89, passed away June 4, 2020 in Wenatchee from an extended illness.

Robert J Jaspers, age 89, passed away June 4, 2020 in Wenatchee from an extended illness.

Born to Leo and Alta Jaspers on June 2, 1931 in Lewiston, Idaho. He graduated from Lewiston High School. He continued his education and graduated from Eastern WA University in 1953 with a Bachelor’s Degree in Education and later went on to receive his Master’s Degree in Industrial Arts. He married Marcella F Costello on July 11, 1953 and they were married for 50 years.

He was drafted into the Army shortly after their marriage and was stationed at Fort Smith, AR before moving overseas to Germany where he was stationed for the remainder of his service. In 1955, his teaching career began in Hunters, WA. In 1957, they moved to Wenatchee. He taught at Sunnyslope, H.B Ellison, and finished his career at Orchard Jr. High where he taught industrial arts for 33 years and retired in 1988. He also had a love for basketball and coached 7th grade basketball for many years. As a teacher and a coach, he had such a positive impact on his students over the years and everyone knew him as “Mr. J”. His patience, knowledge, and compassion for teaching whether in shop class or in life, made everlasting impressions on those who knew him. Bob was named WIAA Educator of the year 1980-1981 for Washington State. After retiring from teaching, Bob & Marcella started a woodcraft business called “Mr. J’s Woodcraft” which they would sell their beautiful wood creations at craft fairs all over the state.

He was a member of St. Joseph’s Catholic Church, Knight of Columbus, WIAA, VFW and was involved with many youth activities. He was always generous with his time and skills helping others. Bob was a wonderful husband, father, grandfather, brother & companion. He was very talented in making anything with wood. His passion was working in his woodshop and he loved to go fishing and enjoyed his garden.

A private burial will be held at this time due to the Covid19 restrictions.
Read Less

To send flowers to the family or plant a tree in memory of Robert "Bob" Joseph Jaspers, please visit our Heartfelt Sympathies Store.

There are no events scheduled. You can still show your support by sending flowers directly to the family, or planting a memorial tree in memory of Robert "Bob" Joseph Jaspers.
Visit the Heartfelt Sympathies Store

Posted Jun 13, 2020 at 06:16pm
Dear Jaspers family
Sorry for your loss of your Father, Bob Jaspers. I was fortunate to spend 25 years working with him at Orchard Jr. High School &Orchard Middle School. He was a kind & patient man who was a big favorite with students. He was a pleasure to work with and always had a smile or a joke for fellow employees. He will be missed. Milly Damish, wenatchee wa
Comment Share
Share via:
JB

Posted Jun 11, 2020 at 10:39pm
Bob was a friend of ours thru Diane, a school chum of mine. We first met Bob, long ago at one of our WHS Class of ‘54 Reunions, Diane helped plan. We enjoyed our monthly visits at the Pizza place up Grant Road, with those same Classmates. One of the last times we visited was at another teachers funeral, Dick Cunningham, another friend. Your Bob was so impressed with the Scottish bag pipes that were part of that service, that day.
We enjoyed knowing him and are very sorry for your families loss.
Jamet and Duane Bolinger Lake Chelan WA.

Posted Jun 08, 2020 at 06:00pm
Bob/Mr. Jaspers, was my 9th grade woodshop instructor at H.B. Ellison Jr. Hi, here in Wenatchee. He let me come in an hour early, everyday, and work on the ribs for a Kayak that I was building at home. He allowed me to make a walnut wood bowl and he enter it in a Trade Show here in Wenatchee. It won some sort of award. Still have the bowl. Entered it at the County fair where it got a blue ribbon. Because of his inspiration and guidance I learned a lot about life . I learned, through time ,that he was a U.S. Veteran and, I having served In the U.S. Air Force, we became closer in our relationship. I moved back to Wenatchee and through the years have built up a very nice woodworking shop that he would be proud of. I am in it just about everyday. He was a true mentor to me. R.I.P Mr. Jaspers
Comment Share
Share via: 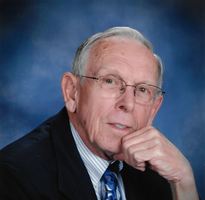