To share your memory on the wall of Alice Porter, sign in using one of the following options:

Provide comfort for the family of Alice Porter with a meaningful gesture of sympathy.

Alice Virginia Porter, 92, a longtime Wenatchee Valley resident, passed away on Thursday, May 7, 2020 in Wenatchee.

Alice Virginia Porter, 92, a longtime Wenatchee Valley resident, passed away on Thursday, May 7, 2020 in Wenatchee.

Alice was born on March 3, 1928 in Wenatchee to the late Ralph an Ethel (Goldy) Hansen. Her early years were spent growing up the in the Palisades area. Her mother died in 1937 when she was nine years old and she took on the role of family seamstress. She sewed all of the family clothes and many were made without patterns. After her mother’s death, the family moved to Wenatchee, and then Cashmere where she attended school: graduating from Cashmere High School in 1946.

She continued her education briefly while attending college in McMinnville, Oregon, before returning to Cashmere. There she met and was married to Clarence William Schopp Jr. on May 9, 1948 at the Presbyterian Church in Cashmere. They made their first home together in Cashmere, where they both went to work for the telephone company. Later, they moved to Spokane. While there, Alice went to work at the Crescent in the Jewelry Department. She followed her early seamstress knowledge and went to work at the fashion boutique in Spokane, known to most as K&L: Kathleen Louise’s. They made their moves to Spokane, Kennewick, Cheney, and Davenport. All the while, Alice continued her career as a talented Alteration Seamstress and Furrier.

While in Davenport, Alice worked several years as the High School Secretary, and then worked for a time at the bank. She was briefly married to Kenneth Porter of Spokane on March 26, 1972.

Alice advanced her talents through extended courses of training and traveled to factories, and fashion design studios in Paris, San Francisco, and Boston. She learned how to make pattern for fashion designs and more importantly to her was how to tailor clothing for handicap people. One of her endeavors allowed her unique insight and learning skills to work with and sew the knit fabrics manufactured at the Kandel Knits Mill in Portland, Oregon. This training allowed her to teach classes for Spokane Community College at their Wilbur Satellite Branch, where she taught the art of sewing knit materials.

She returned to Wenatchee in October of 1984, the day her first granddaughter was born. Alice was an accomplished custom designer of Leather, Fabric, and Fur, and was known as the Alteration Lady. She worked at Mills Brothers, Green Turtle Boutique, Katrina’s, and others. After retiring from Mills Brothers, she still did selective alterations and garment designs for a few clients.

Alice was a former, longtime member of Central Christian Church in Wenatchee and for a time, was the Church Treasurer.

The family interment service will be held in the Wenatchee Cemetery.

Arrangements are in the care of Heritage Memorial Chapel, East Wenatchee.
Read Less

To send flowers to the family or plant a tree in memory of Alice Virginia Porter (Hansen), please visit our Heartfelt Sympathies Store.

There are no events scheduled. You can still show your support by sending flowers directly to the family, or planting a memorial tree in memory of Alice Virginia Porter (Hansen).
Visit the Heartfelt Sympathies Store

We encourage you to share your most beloved memories of Alice here, so that the family and other loved ones can always see it. You can upload cherished photographs, or share your favorite stories, and can even comment on those shared by others. 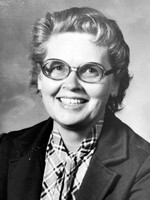