To share your memory on the wall of Wanda Crone, sign in using one of the following options:

On December 24, 2019 Wanda Lee Crone, 73, passed away peacefully at home, following an extended illness. Wanda was born in Ellensburg, WA, on April 28, 1946, to Kermit and Viola Bergevin. When she was a young girl, the family relocated to Wenatchee, where she lived for the remainder of her life. She attended school at St. Joseph’s in Wenatchee and Eastmont High School in East Wenatchee, WA. Wanda married Tom Harmon and had two children Thomas Dean and Aimee Michelle. She worked at Wells and Wade Hardware in the housewares department until the store closed its doors. In April 1989, she married Ken Crone in Coeur d’Alene, IDo. She spent several years working at Highline Nursing home in East Wenatchee until forced to retire due to health issues. She had a passion for baking and took great pride in providing delicious baked goods to family, friends, and neighbors. Wanda liked playing cards and spent many afternoons playing cribbage with her sisters. She also enjoyed an occasional trip to a casino for a bit of gambling. Wanda loved to spend time with her daughter, Aimee and her family at their place south of Vantage, WA. She spent many relaxing hours on the deck, overlooking the beautiful Columbia River. She was an avid reader and always had a good book nearby.

Wanda will be greatly missed by her loving family. She is survived by her son, Tom (Cindy) Harmon of Charleston, SC; daughter, Aimee (Del) Feigal of Vantage, WA; grandchildren: Landon Harmon, Corey Harmon, and Morgan Harmon in Charleston, SC and James (Elisa) Feigal, of Quincy, WA; Matt (Crystal) Feigal of Vantage, WA; and Kyle Feigal of Seattle, WA; and great-grandson, Thomas James Feigal of Quincy, WA. She is also survived by sisters: Phyllis Vandine, Janet Eby, and Nancy Summers all of Wenatchee, WA; brother, George Bergevin in Alaska. She was preceded in death by her husband, Ken; her parents; and her youngest sister Bonnie Jean Boughton. “Repose en paix douce soeur.”

At her request no services will be held. A family gathering honoring her memory will take place in the spring.
Read Less

To send flowers to the family or plant a tree in memory of Wanda Crone, please visit our Heartfelt Sympathies Store.

Print
Per Wanda's request, a private family gathering will be held at a later date. You are invited to visit Wanda's tribute wall to share a memory or leave the family a condolence.

We encourage you to share your most beloved memories of Wanda here, so that the family and other loved ones can always see it. You can upload cherished photographs, or share your favorite stories, and can even comment on those shared by others. 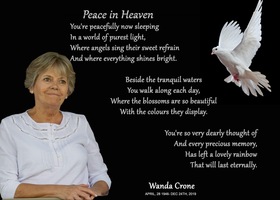