To share your memory on the wall of Darla Fechner, sign in using one of the following options:

Darla N. Fechner, 79, a longtime East Wenatchee resident, passed away on Friday, November 29, 2019 at Colonial Vista Care Center in Wenatchee.
She was born on July 26, 1940 in Libby, Montana to the late Robert and Sylvia (Katarzy) McGrew. In 1948, when she was 8 years old, she moved with her family to East Wenatchee.
Darla attended elementary school in East Wenatchee prior to moving to Wenatchee in 1954. She attended Junior High and High School in Wenatchee.
She met Royal Fechner on her 16th birthday, July 26, 1956 and a short time later they began dating. Three years later on August 28, 1959, they were united in marriage in Wenatchee.
They made their first home in Wenatchee and while Royal was serving in the military, they lived in New Mexico. Upon his honorable discharge, they returned to make their home in East Wenatchee. She went to work at Cashmere Valley Bank at the main branch in Cashmere as a Proof Operator and remained there for over 10 years. They have since continued to make their home in East Wenatchee.
Darla was a former member of the Wenatchee Eagles, Aerie # 204 F.O.E. Auxiliary. She worked as a Volunteer at Grant Elementary School and later became a P.T.A. Board Member. She always made her home an open and inviting place for her kids friends. She loved her pets as well as playing cards and Yahtzee.
She is survived by her husband of 60 years, Royal D. Fechner, East Wenatchee; one son and daughter-in-law, Neal & Ashley Fechner, Wenatchee; one daughter and son-in-law, Barbara & Jeremy Tomlinson, East Wenatchee; one brother and sister-in-law, Walter R. & Julie McGrew, Olympia and one granddaughter, Emoree Mae Fechner, Wenatchee. She was preceded in death by her parents and one sister, Linda.
A Commemoration Service will be held on Friday, December 6, 2019 at 1:00 p.m. at Heritage Memorial Chapel, 19 Rock Island Road, East Wenatchee, with Chaplain Scott Langager officiating. The service will conclude at the chapel. Interment will be in Evergreen Memorial Park Cemetery, East Wenatchee. Friends who wish may make memorial donations in her name to the Wenatchee Valley Humane Society, 1474 S. Wenatchee Avenue, Wenatchee, WA 98801. You are invited to visit her tribute online at www.HeritageMemorialChapel.com and leave a memory. Arrangements are in the care of Heritage Memorial Chapel, East Wenatchee.
Read Less

To send flowers to the family or plant a tree in memory of Darla N Fechner, please visit our Heartfelt Sympathies Store.

We encourage you to share your most beloved memories of Darla here, so that the family and other loved ones can always see it. You can upload cherished photographs, or share your favorite stories, and can even comment on those shared by others. 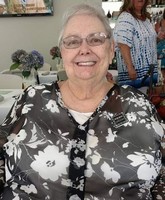