To share your memory on the wall of Carol Harmon, sign in using one of the following options:

Provide comfort for the family of Carol Harmon with a meaningful gesture of sympathy.

She was born February 1, 1952 in Coulee Dam, WA to the late Kenneth and Hazel (Voelzke) Wilmoth. She moved with her family to East Wenatchee as a young child and attended Eastmont School District. Upon returning to the Wenatchee area she went to work at the Peter Rabbit Stores, Inc. in East Wenatchee. In the 1980’s she opened Children’s Circle Daycare in East Wenatchee and has been continually operating the Daycare since that time. She loved all children and considered the many children she cared for through the years her family. Carol was an avid reader and loved getting “lost” in a good book. Carol adored her grandchildren and often had one or more of them with her on most days. She will be missed by all who knew her.

Carol is survived by her husband Jim R. Harmon, her five children, Danielle (Todd) Flaget of Wenatchee, Nathan (Cala) Truitt of Kennewick, Kayla (Allen Braley) Harmon of Wenatchee, Kimberly Harmon of Wenatchee and Darrin Harmon of Spokane; Her sister, Kathy (Larry) Spence of Quincy; her 11 grandchildren and 1 great-grandson. She is preceded in death by her parents; her brother, Kenneth Max Wilmoth and daughter, Kerrie Lynn Boettiger.

A Celebration of Life will be held on Saturday, December 7, 2019 at 2 PM at Eastmont Baptist Church in East Wenatchee. You are invited to view their online tribute on www.heritagememorialchapel.com to share a photo or to leave an online condolence. Arrangements are in the care of Heritage Memorial Chapel, East Wenatchee and Cashmere.
Read Less

We encourage you to share your most beloved memories of Carol here, so that the family and other loved ones can always see it. You can upload cherished photographs, or share your favorite stories, and can even comment on those shared by others.

With love, Don, Sherry, Eric and Katie sent flowers to the family of Carol Harmon.
Show you care by sending flowers

Posted Dec 06, 2019 at 10:43pm
We will miss Carol very much. She was such a wonderful person and loved all the children she cared and they loved her in return.

Posted Dec 04, 2019 at 07:58pm
Carol was a most loving person to all who entered her door. She especially loved the children around her. Our two boys and we were all honored with her care. As a common friend just reminded me...she taught us how to raise our sons (she was right and Carol always had a good suggestion). She always had a song in her heart and shared so much early stage music learning with the children around her. What a beautiful voice! She was always there, every day and more than that if we needed it. We will always appreciate what Carol's day care and her entire families' involvement did to support our family and the development of our children. While with the Harmon family, we made life long friendships. We enjoyed running into Carol and Jim in the community to share a moment of family goings on. Our hearts go out to Jim, your children, and grand children and all the people still in the day care. One thing we know, the love abounds where they gather. Hopefully, the singing will also. The Fullers
Comment Share
Share via:

Posted Dec 02, 2019 at 02:25pm
Words cannot convey how special and loved Carol was by our family. She was our daughters' 'daytime' mom throughout their childhood. She taught them, cared for them, and loved them. She took them to church on Wednesday nights. She had sleepovers for them. My daughters have two favorite meals from Carol, chili 'n rice and her chicken noodle soup! This past summer Carol and Jim attended our daughter's wedding and we have a beautiful picture of them with the bride and groom that we will cherish. As Sherry said, she was truly a God-given angel on Earth!
Comment Share
Share via:
S

Posted Nov 30, 2019 at 01:38am
Carol was a true prayer warrior. She was the most kind hearted, caring person I have ever known. She was a second Mother to our children. They always felt safe and happy while in her loving care. We were truly blessed when we found Jim and Carol Harmon to care for our children while we were at work. She nurtured and cared for hundreds of children. She was a God-given angel on earth and we will miss her desperately. We love you Carol!
Comment Share
Share via: 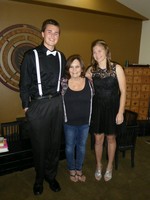