To share your memory on the wall of Everett Burts, sign in using one of the following options:

Provide comfort for the family of Everett Burts with a meaningful gesture of sympathy.

Everett Burts was born in May Valley, WA, on September 25, 1931, and lived a full and productive life. Cancer took him from us on November 17, 2019. His wisdom, generosity, and love will be missed by eve... Read More
Everett Burts
Wenatchee, WA

Everett Burts was born in May Valley, WA, on September 25, 1931, and lived a full and productive life. Cancer took him from us on November 17, 2019. His wisdom, generosity, and love will be missed by everyone who knew him.

Throughout his life, Everett served his community as an active member of the Elks Club, Rocky Mountain Elk Foundation, Wenatchee Sportsman's Association, Boy Scouts and Good Sam's. He was a founding member of the Apple Country Snowmobile Club and his passion for wildlife and outdoor activity led to the development of the Horse Lake Preserve.

While Everett worked hard, he also recognized the importance of working together. He was blessed by mentors through his whole life. He worked with his brother, Lee, one of his best friends, to run the family farm while both held full time jobs. His friends knew him as a generous and reliable person, willing to come to their aid any time. His sharp mind and practical outlook helped him solve problems wherever he went.
They raised two sons: James (Julanne) and Doug (Janet). They were blessed by six grandchildren and six great-grandchildren, so far. Everett was proud of his family and loved them deeply. He worked hard to bless them as children and as adults: hunting, camping, fishing, and time spent together were part of the formula. Every outing was a mix of fun and learning. He seemed to have an inexhaustible supply of wisdom, patience, and practical knowledge.

His family wants to thank our friends for their prayers and support. We would also like to commend the Hospice association for their care in his final days.

A Memorial Service will be held at Wenatchee First Assembly of God, 1520 McKittrick St., Wenatchee, WA, on February 22, 2020, at 1:00 p.m. You are invited to visit his tribute online at www.HeritageMemorialChapel.com and leave a memory. Arrangements are in the care of Heritage Memorial Chapel, East Wenatchee, WA.
Read Less

We encourage you to share your most beloved memories of Everett here, so that the family and other loved ones can always see it. You can upload cherished photographs, or share your favorite stories, and can even comment on those shared by others.

Posted Dec 13, 2019 at 07:48pm
Many fond and pleasant memories of Everett from college days to the present. He served and contributed much to the community
and fruit industry. Sympathy and prayers for Willow and family. Leo and Pat Sax
Comment Share
Share via:
KH

Posted Dec 10, 2019 at 06:57pm
I have such fond memories of Everett---he was always so kind to me as a child at the Tree Fruit Research events at Christmas and at Lake Chelan----and always so kind and funny when I had my first jobs at the research center too. He would stop and ask how I was doing, teach me a little something, share a joke and then go on to change the world with his important work. I can still hear his voice in my head and I am so appreciative that he was a part of my development as a scientist. I am forever grateful for his environmental care and giving to the Wenatchee area and the planet. A good man and a good life.
Comment Share
Share via:
RW

Posted Dec 10, 2019 at 06:53pm
I did not know Everett well, but the times that I was with him I found him to be one of the nicest men I have even known. Such a gentle nature and just all around nice. Prayers for Willow as I know she will miss him so much. God Bless you Everett.
Ronda Wood
Comment Share
Share via:
MH

Posted Dec 10, 2019 at 06:01pm
In the past, I had an opportunity to talk with Everett about wolves and the on-going wolf issues, it was fascinating & extremely educational to learn from him and to get his perspectives. He was a great resource albeit probably not utilized enough from others who could have used the knowledge. I will miss him.
Comment Share
Share via:
MH

Posted Nov 21, 2019 at 04:34pm
You gave me lots of information on wolves and gave me a knowledgeable perspective on the wolf situation in this state, thank you. And also thank you for giving me some of your written & related work on wolves, it was a pleasure conversing with you and we have lost a great resource.
Comment Share
Share via: 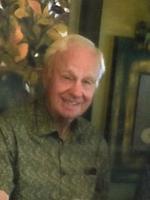