To share your memory on the wall of Gerald Covert, sign in using one of the following options:

Gerald “Jerry” Smith Covert was born August 2, 1933 to Smith and Lapreal Covert in Idaho Falls, Idaho. After his parents death in 1940, Jerry came to Leavenworth and was raised by his grandmother, Mary Jane Covert. Jerry attended school in Leavenworth and graduated from LHS in 1951. He served in the US Army from 1953 to 1955 at Fort Ord, CA and Fort Knox, KY.

On April 14, 1956 he married Rose Marie Hutchins in Louisville, KY. In 1966, they and their three children, Lynn, Gary and Steve, moved to Leavenworth, WA. Jerry started in auto body repair at 16 in Louisville, KY, and worked for Stan Brender in Leavenworth, WA, and in Wenatchee, WA. He owned and operated Dryden Auto Complex in Dryden, 1973-1980, and then Dryden Body Shop from 1980 to 1998, when he retired.

Jerry's family would like to extend a special thank you tp Mountain Meadows & the hospice staff for their time and special care.

A Funeral Mass will be held at 11:00 am on Wednesday, September 25, 2019 at Our Lady of the Assumption Leavenworth, 145 Wheeler Street, Leavenworth, WA 98826. The interment, with military honors, will follow in the Mountain View Cemetery. You are invited to view his online tribute at www.Heritagememorialchapel.com to leave a memory or share a condolence. Arrangements are in the care of Heritage Memorial Chapel, East Wenatchee & Cashmere.
Read Less

To send flowers to the family or plant a tree in memory of Gerald Smith "Jerry" Covert, please visit our Heartfelt Sympathies Store.

We encourage you to share your most beloved memories of Gerald here, so that the family and other loved ones can always see it. You can upload cherished photographs, or share your favorite stories, and can even comment on those shared by others.

The Van Parys & Stevens Families and The Stan Mikesell Family sent flowers to the family of Gerald Smith "Jerry" Covert.
Show you care by sending flowers

Posted Sep 24, 2019 at 03:29pm
Wishing you peace to bring comfort, courage to face the days ahead and loving memories to forever hold in your hearts.

Posted Sep 23, 2019 at 12:24am
Jerry was my father in law, and the best I could have hoped for. I am beyond proud to be a Covert for 21+ years!! Jerry and Rose are the most giving, kind hearted people I have ever known. I am thankful to be one of their own. Jerry and I joked with each other over the years and have only had one serious conversation and that was after Steve was taken from us....I thought Jerry was crazy for looking toward the future and made one request, which I think I obliged :-) You lived a porposful life and led by example. I hope that I and your grandchildren will make you proud. Until we meet again.....I love you.
Comment Share
Share via:
TF 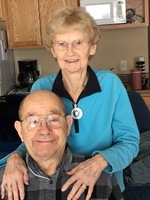