To share your memory on the wall of Dennis Schreiner, sign in using one of the following options:

Provide comfort for the family of Dennis Schreiner with a meaningful gesture of sympathy.

Retired Master Sergeant Dennis E. Schreiner, 82, has received his final orders, “To Guard the Gates of Heaven”. He was a resident of Cashmere and a former longtime resident of Oak Harbor and peacefully passed away on Thursday, April 18, 2019.

He was born on June 19, 1936 at Unidilla, Nebraska, son of the late Harold and Loah (Phelps) Schreiner. He was raised and attended school and graduated from high school at Potter, Nebraska. He briefly worked on the family farm and in the areas oil fields prior to entering the Marine Corps. He served multiple tours in Viet Nam, Okinawa, the Philippines and at the U.S. Embassy in Greece. While on leave, he met Dorothy Hessler in Scotts Bluff, Nebraska. They were later married in August of 1962. They made a number of moves during his career with the Marine Corps, which included training schools located in Virginia, Tennessee, and California. While in Santa Ana, they started their family, having two daughters; Lori and LeAnn. He was a Rifle Sharpshooter, Pistol Expert and instructor, along with his specialty in Helicopter and Aircraft Engine Mechanics. Denny worked up through Staff Sergeant to Gunnery Sergeant and later became Master Sergeant. He was transferred to Whidbey Island Naval Air Station in the fall of 1971 and they settled their family in Oak Harbor. He worked as an Aviation Maintenance Control Administrator as well as teaching rifle and pistol marksmanship.

He retired from the active military and worked at the Boeing, Everett Plant, prior to becoming maintenance man at Black Mountain Ranch near Deming, Washington. He later returned to work at the Whidbey Island Sea Plane Base in Search and Rescue until fully retiring.

Denny was honored to care for his wife, Dorothy through Alzheimer’s Disease at home for two years before she needed additional care, where he faithfully visited every morning and evening for three years. He was preceded in death by his wife, Dorothy, on November 2, 2005. He continued to make his home in Oak Harbor until moving to Cashmere in 2008. He built his home in Cashmere next door to his daughter and her family. He moved to Bonaventure of East Wenatchee in October of 2018, with his dog, “Pepper”.

Denny was a member of the Oak Harbor Fleet Reserve, former member of both the American Legion and the Veterans of Foreign Wars and the National Rifle Association. He volunteered his time helping with fund raisers for the Fleet Reserves Scholarships. He often ran the barbeques.

He is survived by two daughters: Lori (Ron) Sires of Lincoln, WA and LeAnn (Kameron) Miller of Wenatchee, WA; grandson, Ethan Miller of Cashmere, WA; and sisters: Verlee Oppman of Aurora, CO, and Sandra Gusto of Redwood City, CA. He was preceded in death by his parents, his wife, Dorothy, and his older brother, Larry Schreiner.

A Celebration of Life Gathering with Military Honors will be held on Friday, May 10, 2019 at 2:00 p.m. at the American Legion, Post 10, 208 N. Wenatchee Ave., Wenatchee, WA. In Lieu of flowers, memorial contributions in his name are suggested to the GarySiniseFoundation.org or the charity of your choice. You are invited to view his tribute online at www.HeritageMemorialChapel.com and leave a memory.

To send flowers to the family or plant a tree in memory of Dennis E "Denny" Schreiner, please visit our Heartfelt Sympathies Store.

We encourage you to share your most beloved memories of Dennis here, so that the family and other loved ones can always see it. You can upload cherished photographs, or share your favorite stories, and can even comment on those shared by others.

Posted May 02, 2019 at 08:21am
I worked with Dennis in the early 80,s at a private camp ground near Oak Harbor. I learned a lot about family life from him. He was a great man to have as a coworker and friend. Pat Dallen Oak Harbor.
Comment Share
Share via:
JR

Posted Apr 28, 2019 at 04:38pm
Denny ways the kind of guy that would bend over backwards for you if you needed help. As helicopter crew chiefs, we served together in Vietnam through out 1966. He was always smiling and joking and around to help and make sure your plane was up and ready to go. I remember during one of our squadron reunions which was held in Washington, D.C. in 2008, I had invited my young grandson to join me. This was his first solo flight from his home in Utah. Denny got to meet him and for the next few days treated him like he was his own grandson. When the reunion was over, I had to head home for Texas on a different airline then my grandson, who was heading back home to Utah. I could tell by my grandson's face he was a bit worried about trying to make it to his flight alone. As we stood there waiting for the taxi, I was trying to assure him everything would be ok. That's when Denny stepped up and since he was going out of the same airport, offered to ride with him in the taxi and would make sure he got on the right flight. What a relief that was! That was Denny. God bless him!
Comment Share
Share via:
JH

Posted Apr 28, 2019 at 02:40pm
I know you'll be in Heaven since you served your time in Hell. So stand your guard duty at those pearly gates for the rest of us called up. S.F. 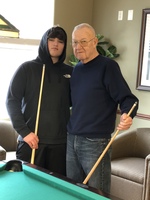 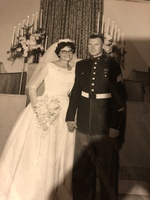 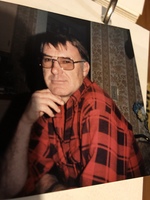 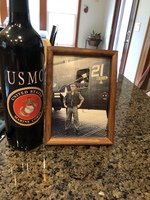