To share your memory on the wall of Wilma Crane, sign in using one of the following options:

Provide comfort for the family of Wilma Crane with a meaningful gesture of sympathy.

Wilma Inez Crane passed away April 5, 2019, three months short of her 99th birthday. Wilma was born on her grandfather’s farm near Wideman, Arkansas, on July 5, 1920, to Ewing Love and Ellen Elizabeth (Bray) Pearson. She grew up on farms and attended country schools in the vicinity of Wideman and Oxford, Arkansas. In 1936, she married Robert Loyd Claiborne, and they had two daughters, Novelyn and LaVerne. After their divorce in 1956, she and LaVerne moved to Oroville, where several family members lived. In 1960, she married Floyd Crane and moved to East Wenatchee. She and Floyd operated a very successful family orchard until they retired.

Wilma enjoyed gardening, knitting, needlework, and cooking. She had a wide circle of friends, and she kept up with the events in all of their lives. After Floyd’s death in 2005, she lived for several years in Ambercrest Condominiums in East Wenatchee. She moved to Bonaventure of East Wenatchee in 2014, when living alone became difficult for her.

Wilma was preceded in death by her parents; her sister, Marie Pearson Hylton; her brothers: Ezra Pearson, Ermil Pearson and Euel Pearson; her daughter: LaVerne Smith; her step-daughter: Mary Shanda; and numerous aunts and uncles. She is survived by her daughter: Novelyn (Roy) Brandt of Yakima; her son-in-law, Lloyd Smith of East Wenatchee; her stepdaughter, Jean (Howard) Turner of Brookings, OR; her step-daughter, Dorothy Armstrong of Brinnon, WA; her granddaughter, Tricia (Scott) Angell of Gig Harbor, WA; and several step-grandsons and step-granddaughters.

Wilma will be remembered as the wonderful mother, wife, and friend she was, a person who always was there to help others any way she could when they were in need.

The family is grateful to the staff at Bonaventure of East Wenatchee for their care and compassion during the nearly five years Wilma lived there.

In lieu of flowers, please donate in Wilma’s honor to the charity of your choice. A graveside service will be held at 2:00 PM on Thursday, April 11, 2019, at Evergreen Memorial Park, 1301 10th St. NE, East Wenatchee, WA. Arrangements are in the care of Heritage Memorial Chapel, East Wenatchee.
Read Less

To send flowers to the family or plant a tree in memory of Wilma "Inez" Crane, please visit our Heartfelt Sympathies Store.

We encourage you to share your most beloved memories of Wilma here, so that the family and other loved ones can always see it. You can upload cherished photographs, or share your favorite stories, and can even comment on those shared by others.

Troy sent flowers to the family of Wilma "Inez" Crane.
Show you care by sending flowers

Posted Apr 08, 2019 at 08:29pm
There is so much sorrow in the world. But the death of our loved ones brings the deepest sorrow of all. Please accept my condolences. May God’s promise to help you through this difficult time bring you peace (Isaiah 41:10) and his promise for the future (John 5:28, 29) give you a wonderful hope.
Comment Share
Share via: 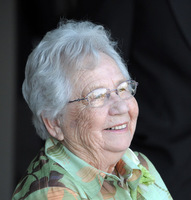