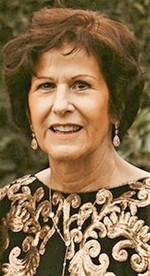 Kelly M. Hinderer Peterson, age 60, of East Wenatchee, WA, passed away on Sunday, January 6, 2019, after an extended illness, surrounded by her loving family. Kelly was born on September 6, 1958, in Wenatchee, WA, to Arnie and Marita Hinderer. She grew up in the Wenatchee Valley, graduating from Eastmont High School, in 1976. She attended Western College of Commerce. She first worked at Central Washington Bank, followed by 30 years of employment at Pioneer Title Company, as escrow manager. She married Victor E. Peterson on August 18, 1984, and they had two sons: Daniel and Jake. Kelly was a member of Faith Lutheran Church of East Wenatchee and Association of Professional Mortgage Women.

She enjoyed traveling to Mexico and Hawaii with her family. Kelly lived to encourage her sons in their sporting events. She was always their chauffeur and biggest cheerleader. She helped out in the running of the family orchards and eventually in the operation of her own orchard with her husband, Vic.

She is survived by her husband, Vic; son, Jake (Kayla); mother, Marita Hinderer; sister, Alana Adkins (Sam) of Great Falls, MT; along with numerous aunts, uncles, cousins, nieces, and nephews. She was preceded in death by her son, Daniel in 2009; and her father, Arnie Hinderer.

In lieu of flowers, contributions may be made to The American Cancer Society.