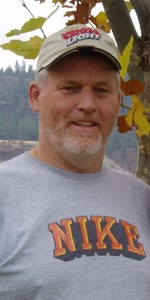 Donald Lee Parkins died on Sunday, December 30, 2018, after a battle with ALS (Lou Gehrig’s Disease). Don was born on January 2, 1955, in Leavenworth, WA, to Bertha L. and Frank H. Parkins. Don was raised in Monitor along with his five brothers and one sister. He attended grade school in Monitor and graduated from 8th grade in 1969. He attended high school in Cashmere.

As was the custom at that time, all Monitor high school kids were bused to Cashmere for high school. Don was sophomore class president and played football and basketball during his freshman and sophomore years. Don had many friends in high school and graduated in June, 1973. In September of that year, Don joined the United States Air Force.

He completed basic training at Lackland Air Force Base in San Antonio, TX, and completed a four month weapons mechanic school at Lowry Air Force Base in Denver, CO. Don was stationed at Nellis Air Force Base in Las Vegas, NV, where he worked for 3.5 years. After completing his commitment to the Air Force, Don received an Honorable Discharge in September, 1977. Don returned to Wenatchee and went to work with his father and brother, Carl, at the family business, Equipment Manufacturing, Inc. For the next 40 years, Don and Carl worked side by side until Don’s declining health forced him to retire in February, 2018.

In September, 1982, Don met Judy Hurley. It was love at first sight, at least from Don’s perspective. They moved in together and were married in December, 1983 at The Hitching Post in Coeur D’ Alene, ID. In 1986, Don and Judy welcomed the birth of their daughter, Jamie. Don also loved Judy’s children from her previous marriage. He treated them like his own and they and their kids loved Grandpa Don. Don always said that he was a very lucky man to have so many kids and grandkids.

Don is survived by his wife, Judy, of 35 years and daughter, Jamie, both of the family home; stepsons: Ronnie Skelton (Terri) of Wenatchee, WA, Mike Skelton (Jill) of Queen Creek, AZ; and stepdaughter, Billie Skelton of Port Angeles, WA. He leaves behind numerous grandkids, great-grandkids, siblings, nieces and nephews.

Services will be held at 1:00 p.m., on Saturday, January 5, 2018, at Heritage Memorial Chapel, 19 Rock Island Rd, East Wenatchee, WA. In lieu of flowers, the family asks that you donate to the American Legion Post #10 or the Vets Serving Vets organization, that were so kind in donating their time and supplies to help make the difficult transition as smooth as possible. You are invited to view Don’s online tribute at www.HeritageMemorialChapel.com to leave a condolence or share a memory. Arrangements are on the care of Heritage Memorial Chapel, East Wenatchee.